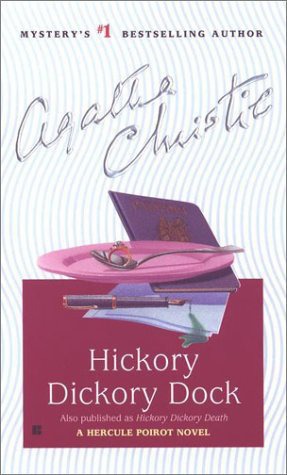 Poirot's solution of the petty thefts is unsubtle but effective: once he has threatened to call in the police, Celia Austin quickly confesses to the pettier incidents. She denies, however, the following: stealing Nigel Chapman's green ink and using it to deface Elizabeth Johnston's work; taking the stethoscope, the light bulbs and boracic powder; and cutting up and concealing a rucksack. She committed the lesser thefts to attract the attention of Colin McNabb, a psychology student who then becomes engaged to her. She makes restitution for the crimes and reconciles with her victims. The more important incidents remain unsolved. Celia is discovered dead the following morning from an overdose of morphine. It does not take investigators long to see that her death is murder.

Inspector Sharpe solves the mystery of the stolen stethoscope during his interviews with the inhabitants of the hostel. Nigel Chapman admits to having stolen the stethoscope to pose as a doctor and steal some morphine tartrate from the hospital dispensary as part of a bet to acquire three deadly poisons (the other two being digitalin and hyoscine). He claims the poisons were carefully disposed of, but cannot be sure that the morphine was not stolen from him while it was in his possession. Poirot turns his attention to the reappearance of the diamond ring, and confronts Valerie Hobhouse, in whose soup the ring was found. It seems that the diamond had been replaced with a zircon and that only Valerie could place it in the dish of soup; Poirot accuses her of having stolen the diamond. She admits to having done so, saying that she needed the money to pay off gambling debts. She also admits to having planted in Celia Austin's mind the idea of the thefts.

Mrs Nicoletis is behaving very nervously. She is killed by drinking poisoned brandy. Poirot focuses his attention now on the cutting up of the rucksack. By careful study of the rucksack's design, he identifies an unusual corrugated base, and suggests to the police that the rucksack is part of an international smuggling operation. The rucksacks were sold to innocent students, and then used to transport drugs and gems. Mrs Nicoletis had been bankrolling the organisation, but was not the brain behind it. When the police visited Hickory Road on an unconnected issue, the murderer had cut up the rucksack to avoid its being found and removed light bulbs to avoid being recognised.

Patricia Lane comes to Nigel and admits that she has taken the morphine from the bottle in his drawer and substituted for it bicarbonate of soda. Now the bottle of bicarbonate of soda has been taken from her own drawer. While they are searching for this bottle she mentions that she is intending to write to his father to reconcile the two. Nigel tells her that the reason for his estrangement from his father is that he discovered that his father had poisoned his mother with Medinal, a trade name for barbitone sodium. This is why he changed his name and carries two passports. Nigel goes to Inspector Sharpe and tells him about the missing morphine, but while he is there, Patricia telephones to say that she has discovered something further. By the time that Nigel and Sharpe get to the house, she is dead, killed by a blow to the head. Akibombo comes to Sharpe and says that he had taken Patricia's bicarbonate to ease a stomach complaint; when he took a teaspoonful of the bicarbonate, however, he had stomach pains and later discovered that the white powder was in fact the boracic powder. By the time Patricia had substituted the bicarbonate, the morphine had already been substituted by the stolen boracic powder. Poirot's suspicions about Valerie Hobhouse's role in the smuggling operation are proved correct by a police raid on her beauty shop.

The murderer is Nigel Chapman, who was known to have the morphine in his possession. He killed Celia because she knew about his dual identity and also knew that Valerie travelled abroad on a false passport. He killed Mrs Nicoletis because she was sure to give the smuggling operation away under pressure, and killed Patricia because she was likely to draw his father's attention to the recent events, as she was on the verge of writing a letter to him in the hope of reconciling him with his son before his death. When Poirot outlines to Nigel's father's solicitor the case against Nigel, the solicitor provides final proof. Nigel's mother had been poisoned, not by his father, but by Nigel. When the father discovered this (medinal is a poison slow to act, and the mother told her husband), he forced him to write a confession and left it with his solicitor together with a letter explaining that it should be presented to the authorities in case of any further wrongdoing by Nigel. Valerie placed the call to the police station, which had apparently come from Patricia, to establish an alibi for Nigel who had already bludgeoned Patricia. The green ink was a double-bluff intended to divert suspicion away from him. Valerie is willing to incriminate Nigel fully because Mrs Nicoletis was actually her mother.