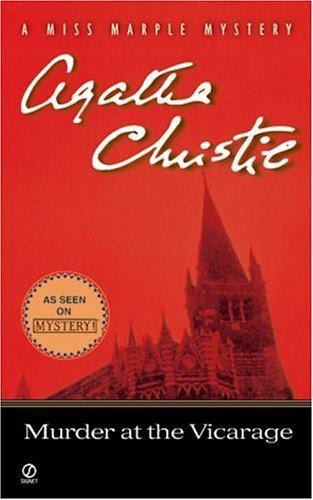 Murder at the vicarage - Agatha Christie

In St. Mary Mead, no one is more despised than Colonel Lucius Protheroe. Even the local vicar has said that killing him would be doing a service to the townsfolk. So when Protheroe is found murdered in the same vicar's study, and two different people confess to the crime, it is time for the elderly spinster Jane Marple to exercise her detecting abilities. According to Miss Marple, there are seven suspects, including the Vicar himself. After some juggling of clues and events, Miss Marple, using her excellent deductive skills, determines the facts of the crime.

At the end, she finds that the two people who confessed were, indeed, the real murderers and simply wanted to evade suspicion. Mrs Anne Protheroe, wife of the deceased, and Lawrence Redding, her lover, committed the crime. The vicar and his wife, Leonard and Griselda Clement, who made their first appearance in this novel, continue to show up in Miss Marple stories: notably, in The Body in the Library (1942) and 4.50 from Paddington (1957).

Murder at the vicarage - Agatha Christie