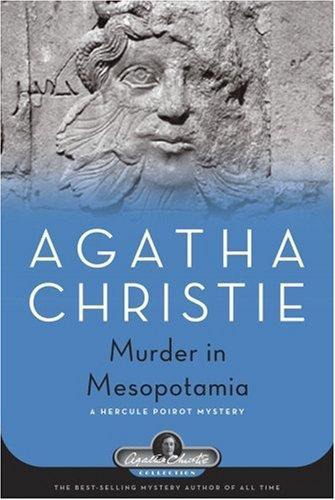 Amy Leatheran, a nurse, is hired to care for Louise Leidner by her husband Dr Erich Leidner, a Swedish archaeologist, who married Louise two years earlier. They are on a dig near Hassanieh, Iraq, then a British protectorate. Louise was married briefly during the Great War 15 years earlier to a German named Frederick Bosner, who worked for the US State Department but was actually a German spy. Bosner was turned in by Louise, tried for espionage and sentenced to death. He managed to escape while he was being transported but his train crashed; a body bearing his identification was found in the wreckage. Louise has received letters purporting to be from her first husband, which puts her on edge.

A week after the nurse's arrival, Mrs Leidner is found dead by her husband in her room, struck fatally on the head with a large blunt object. Nurse Leatheran observes that the murder weapon is not in the room. Captain Maitland speaks with all in the house, while Dr Reilly inspects the body. They establish the timeline and become certain the crime is an inside job. The Belgian detective Hercule Poirot is travelling in Iraq; his old friend Dr Reilly calls Poirot for aid.

It is apparent to all that the murderer of Mrs Leidner must be one of the expedition. The only entry to Mrs Leidner's bedroom is from the house, as the one window is barred, and was shut when her body was discovered. Miss Johnson thought she heard a cry, but disbelieves her own ears when she learns that the window was closed; there was no way for any sound to reach her. The group carry on as Dr Leidner arranges for his wife's funeral and the local police begin their work, along with Poirot. The first round of questions establishes no obvious suspect, as everyone can account for their time and was in the sight of others.

At Dr Reilly's home, Nurse Leatheran tells Poirot the story of Mrs Leidner's first marriage and the young brother-in-law she has not seen in fifteen years. Poirot speculates that one of the members of the dig may be this younger brother William or Frederick himself, as the identity of the body in the train wreck could not be confirmed. They meet Sheila Reilly, who viewed Mrs Leidner as one who must have the attention of every man around her. Dr Reilly adds his own views, calling her "belle dame sans merci".[5] Poirot worries that Nurse Leatheran may not be safe to return to the house. She does return, wanting to attend the funeral.

After the funeral, Miss Johnson and Nurse Leatheran are on the roof. Miss Johnson states she has realized how someone could enter without being seen, but explains nothing. That night, Miss Johnson is poisoned by hydrochloric acid substituted in the glass of water on her nightstand. As Nurse Leatheran attempts to revive her, she manages to choke out the words "The window! The window!" before she dies. Nurse Leatheran first makes it clear this was no suicide, and thinks the words indicate how her water was replaced by the acid – through her window. Poirot now has two murders to solve. He considers it a crime passionnel, in which he must understand the character of Louise Leidner to solve both murders. He solves the crimes, but has no proof.

Poirot presents his results to the group at the house, after a day of sending telegrams all over the world. Mrs Leidner and Miss Johnson were murdered by Dr Leidner, who is actually Frederick Bosner. He survived the train crash, but a young Swedish archaeologist named Erich Leidner did not and was disfigured beyond facial recognition; Bosner stole the dead man's identity. Fifteen years later, established as Leidner, he remarried his wife, who did not recognise him. Bosner sent the letters to discourage Louise from her other relationships. When Bosner remarried her under his new identity, he stopped writing them. However, he saw that Louise was falling in love with Richard Carey, his friend, and his possessive rage led him to murder. He murdered Miss Johnson because she figured out how he had murdered his wife.

Bosner killed his wife from the roof as he sorted pottery. Louise Leidner was in her room. She heard a noise and then saw a mask at her window, dropped by Bosner. She opened the window and stuck her head out through the bars, only to be killed by a heavy stone quern dropped from above. Bosner retrieved the quern with a rope tied through a hole in the stone. Mrs Leidner cried out briefly; it was this cry that Miss Johnson heard. When Bosner climbed down from the roof as usual to see his wife in her room, he moved her body away from the window, and moved the blood-stained rug near the washstand to remove any connection with the window. He shut the window before calling Nurse Leatheran to the room. Bosner diverted suspicion from himself. The nurse was part of his alibi, on the spot to state the time of death. He put hydrochloric acid in Miss Johnson's water glass, to appear as suicide. Poirot points out that drinking hydrochloric acid is an incredibly painful and bizarre way to kill oneself.

Poirot solves another crime at the dig. The man seen looking through the antika room window in that peaceful week was Ali Yusuf, a known associate of Raoul Menier, a skilled thief of antiquities. Menier joined the expedition disguised as epigraphist Father Lavigny, well-reputed but not known personally to any in the team. He had a free hand to steal precious artifacts from the dig and replace them with near-perfect copies made on site. The two were captured boarding a steamer at Beyrouth by the police, who had been warned by Poirot. Not long after, Sheila Reilly marries David Emmott, a suitable match. Nurse Leatheran returns to England.