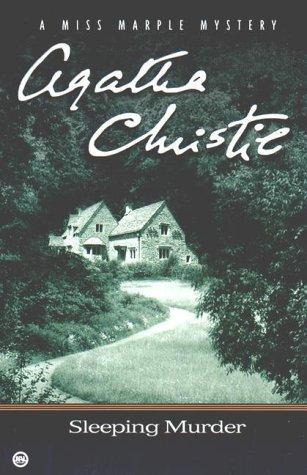 Newlywed Gwenda Reed travels ahead of her husband to find a home for them on the south coast of England. In a short time, she finds and buys Hillside, a large old house that feels just like home. She re-opens the view to the sea from the terrace and renovates with new bathrooms and improved kitchen, staying in a one-time nursery room while the work progresses. She puts off painting and wallpaper, though she forms a definite idea for the little nursery. When the workmen open a long sealed door, she sees the very wallpaper that was in her mind. Further, a place that seems logical to her for a doorway between two rooms proves to have been one years earlier. She goes to London for a visit with relatives, the author Raymond West, his wife, and his aunt, Miss Jane Marple. During the play, The Duchess of Malfi, when the line "Cover her face; mine eyes dazzle; she died young" is spoken, Gwenda screams out; she saw an image of herself viewing a man saying those words strangling a blonde-haired woman named Helen.

Gwenda tells her story to Miss Marple. She was born in India where her father was stationed, then raised in New Zealand by her mother’s sister from a toddler, once her mother died. Her father died a few years after her mother. She has memories of being on a ship, but it is clearly two ships. Miss Marple suggests that for at least a short time, Gwenda lived in England with her father and his second wife, which proves to be the case. Her stepmother, Helen Kennedy Halliday, met her father travelling from India back to England, where their shipboard romance led to marriage upon arrival in England. They rented a house in Dillmouth, the seaside town where Helen grew up. The coincidences prove to be memories from Gwenda’s stay in that house 18 years ago as a very young child. Now Gwenda ponders her frightening image and the closing words of the play: are they real memories as well? Her husband Giles arrives from New Zealand and the couple decide to pursue this mystery.

Helen was raised mainly by half brother, Dr. Kennedy, now retired from practice and moved to another village. He replies to an ad placed by Giles seeking information about Helen. He, too, wants to hear from Helen.

Miss Marple arranges to visit friends in Dillmouth. Miss Marple is often at the house, pulling out bindweed from the neglected garden. She finds the man who once gardened for the Kennedy family, brother and sister, who supplies several useful descriptions of events then. Miss Marple finds the cook from the Halliday household, Edith, who remembers that time well. The Hallidays had purchased a house in Norfolk and were soon to move, before Helen disappeared. Helen was heard to argue with a man that he had always frightened her, and she wanted to get away. The servants presumed this was her husband, but it was not. Helen had a few other men in her life before she married Halliday. One was a local boy, the other the son of the local lawyer trying out India for a while, and third was a man she met on board ship on her way out to India to marry that lawyer’s son. She married none of them, and was mainly interested in escaping her brother. She did fall in love with Halliday, and loved his daughter.

The Reeds advertise, seeking the maid Lily. She writes first to Dr. Kennedy, thinking he is a friend who will explain to her what might be in store if she replies. She says that she does not believe that Helen ran off, as the clothes packed in her suitcase made no sense (taking an evening gown but not the shoes and belt that go with it). The Reeds and Dr. Kennedy agree he should write back to her to arrange a meeting at his present home. Lily never arrives.

The police find Lily’s body in a copse near the train station. She has been strangled. She came by an earlier train, but had Dr. Kennedy’s letter with her, for the later arrival time. Miss Marple advises Gwenda to tell the police everything. Soon, they are digging up the garden, at the end of the terrace, to find Helen’s body. Gwenda is in the house alone when Dr. Kennedy approaches her, ready to kill her by strangling when his attempt to poison her failed. Miss Marple arrives with a container of soapy solution, which she sprays in his eyes to stop the murder attempt.

Dr. Kennedy had strangled his sister, saying the closing words from that play, unaware of the toddler Gwenda at the stair railing above. He buried Helen in the garden. He set up her husband to think he had strangled her, but there was no body, so he was taken as insane, and died in a nursing home. His diary from that time showed him to be quite sane, but he could not explain what he had seen, his strangled wife next to him. Kennedy had first given drugs to make Halliday paranoid, and then drugged his drink so Dr. Kennedy could pose him next to the strangled Helen. Then Kennedy moved her body again. The letter found with Lily was not the one she received from Kennedy; he switched it after he killed her. He did not want the police involved, as they would see through his scheme. He sent the nanny Leonie home with medicines that killed her. Miss Marple explains all this to the Reeds, the full confession from Kennedy and how they should have seen it from the start, from those words in the play.

This post will help the internet visitors for creating new website or even a weblog from start to end.