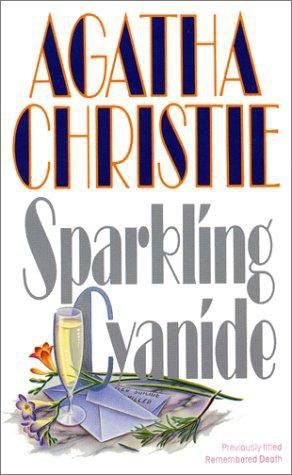 One year earlier on 2 November, seven people sat down to dinner at the restaurant "Luxembourg". One, Rosemary Barton, never got up. The coroner ruled her death suicide due to post-flu depression. Six months later, her husband George receives anonymous letters saying that Rosemary was murdered. George investigates and decides to repeat the dinner at the same restaurant, with the same guests, plus an actress who looks like his late wife meant to arrive late and startle out a confession. The actress does not arrive and George dies at the table – poisoned, like his wife, by cyanide in his champagne. His death might have been judged as suicide, but George shared his concerns and some of his plan with his friend Colonel Race.

As per their uncle's will, if Rosemary died childless her inherited fortune passed to her younger sister Iris, now a wealthy girl. If Iris dies unmarried, the money would pass to her only relative, her aunt Lucilla Drake. Mrs. Drake is a decent person but has a rotter of a son, Victor. During the investigation it becomes clear that the intended victim was Iris. Colonel Race and Iris's suitor, Anthony Browne, realise that Ruth Lessing, George's trusted secretary, had fallen for Victor a year earlier.

The wrong person dies because of Iris's evening bag and the toast to her, the conjuring trick that saves her life. After the entertainment, George proposes a toast to Iris, when all sip champagne except her, being toasted. When the group leaves the table to dance, Iris drops her bag; a young waiter, retrieving it, misplaces it at the seat adjacent hers. When the group returns to the table, Iris sits one seat askew due to the misplaced bag. George sits at Iris's original seat and drinks the poisoned champagne. When this plot fails, Ruth attempts to run Iris over with a car. Colonel Race, together with the police and Anthony Browne, unravel the truth in time to save Iris from Ruth. Her last attempt at killing Iris is to knock her unconscious in her bedroom, then turn on the fireplace gas, and leave the house. Anthony and Colonel Race rescue Iris in the nick of time.

The anonymous letters to George were sent by Ruth, who then encouraged him to re-stage the dinner at the Luxembourg so that Victor and Ruth could kill Iris, as they killed Rosemary. To support a decision of suicide, Ruth had planted a packet of cyanide in Iris's bag, which packet dropped to the floor when she pulled her handkerchief out, without touching it (no fingerprint). Victor acted as a waiter, to drop the poison in the champagne during the show. He was taken at New York at the request of the police. Note that Christie named the ruthless female conspirator "Ruth Lessing", a pun.