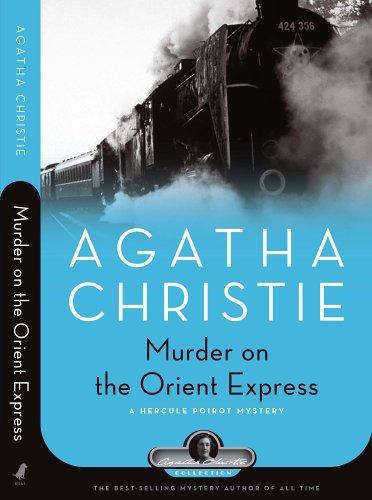 Murder on the Orient Express_ A Hercule - Agatha Christie

After catching the Taurus Express from Aleppo in Syria and traveling to Istanbul, private detective Hercule Poirot arrives at the Tokatlian Hotel. Once there, Poirot receives a telegram prompting him to cancel his arrangements and return to London. He instructs the concierge to book a first-class compartment on the Simplon-Orient Express leaving that night. However this becomes impossible when it is revealed that in an unusual occurrence for the time of year (December), the train is fully booked and Poirot only gets a second-class berth after the intervention of his friend M. Bouc, a fellow Belgian who is a director of the train line Compagnie Internationale des Wagons-Lits and is also boarding the train. After boarding, Poirot is approached by Mr. Samuel Ratchett, a malevolent, elderly American he initially saw at the Tokatlian. Ratchett believes his life is being threatened and attempts to hire Poirot but, due to his distaste, Poirot refuses. "I do not like your face, Mr. Ratchett," he says.

On the second night of the journey, as he is only travelling to Italy M. Bouc gives up his first class-compartment to Poirot who is going to Calais and on to London (Bouc sleeps in the Pullman Coach which has only one other occupant, a Greek doctor named Constantine). This gives Poirot the compartment next to Mr. Ratchett. The train is stopped by a snowdrift near Vinkovci (spelled Vincovci in the book). Several events disturb Poirot's sleep, including a cry emanating from Ratchett's compartment. The next morning, M. Bouc informs him that Ratchett has been murdered and asks Poirot to investigate, in order to avoid complications and bureaucracy when the Yugoslav police arrive. Poirot accepts.

After Poirot and Dr. Constantine examine the body and Ratchett's compartment, Poirot finds a note with the words '-member little Daisy Armstrong' on it, which causes Poirot to ascertain Ratchett's real identity, and possible motives for his murder. A few years before, in the United States, three-year-old heiress Daisy Armstrong was kidnapped by a man named Cassetti. Despite collecting the ransom from the wealthy Armstrong family, Cassetti killed the child. The shock devastated the family, leading to a number of deaths and suicides. Cassetti was caught, but fled the country after he was acquitted. It's suspected that Cassetti used his considerable resources to rig the trial. Poirot concludes that Ratchett was, in fact, Cassetti.

As Poirot pursues his investigation, he discovers that everyone in the coach had a connection to the Armstrong family and, therefore, had a motive to kill Cassetti. Poirot proposes two possible solutions, leaving it to Bouc to decide which solution to put forward to the authorities. The first solution is that a stranger boarded the train and murdered Cassetti. The second one is that all of the passengers conspired to murder Cassetti. He concedes Countess Helena Andrenyi didn't take part, so the murderers numbered 12, resembling a self-appointed jury. Mrs. Hubbard, revealed to be Linda Arden, Daisy Armstrong's grandmother, confesses that the second solution is the correct one. M.Bouc and Dr.Constantine choose to present the first theory to the Yugoslavian police.

Murder on the Orient Express_ A Hercule - Agatha Christie