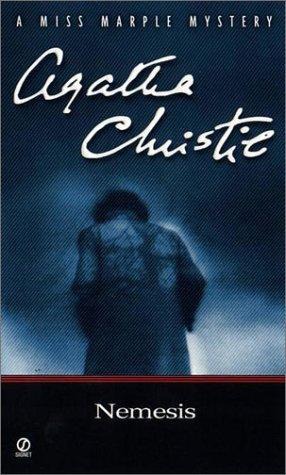 Miss Marple receives a post card from the recently deceased Jason Rafiel, a millionaire whom she had met during a holiday on which she had encountered a murder, which asks her to look into an unspecified crime; if she succeeds in solving the crime, she will inherit £20,000. Rafiel has left her few clues. She begins by joining a tour of famous British houses and gardens with fifteen other people, arranged by Mr Rafiel prior to his death. Elizabeth Temple is the retired school headmistress who relates the story of Verity, who was engaged to Rafiel's ne'er-do-well son, Michael, but the marriage did not happen. Another member of the tour group, Miss Cooke, is a woman she had met briefly in St Mary Mead.

Her next clue comes from Lavinia Glynne; Rafiel had written to Mrs Glynne and her two sisters before his death, suggesting that Miss Marple spend the most physically challenging few days of the tour with them. Miss Marple accepts Lavinia's invitation. She then meets Lavinia's spinster sisters, Clotilde and Anthea Bradbury-Scott. On talking with the servant, Miss Marple learns that Verity joined the family after both her parents died, becoming quite attached to Clotilde. Verity is dead now, brutally murdered, and Michael Rafiel is in prison.

On the morning of her return to her party, Miss Marple learns that Miss Temple had been injured by a rockslide during the previous day's hike, and was lying in a coma in hospital. The group stays over an extra night to wait for news from the tour guide about Miss Temple's health. Professor Wanstead, a pathologist and psychologist interested in criminal brains, had been instructed by Mr Rafiel to go on the tour. He had examined Michael Rafiel at the request of the head of the prison where Michael was incarcerated; he came to the conclusion that Michael was not capable of murder. He tells Miss Marple how uninterested Michael's father seemed. He mentions a missing young local woman, Nora Broad, and he fears she will be found murdered. Wanstead takes Miss Marple to see Miss Temple; in a moment of consciousness, Miss Temple had asked for Miss Marple. Miss Temple wakes long enough to tell Miss Marple to "search for Verity Hunt", and dies that night. The three sisters extend their invitation to Miss Marple when she decides not to return to the tour, and she promptly accepts. That night, Mrs Glynne tells the story of Verity in their household to Miss Marple.

After the inquiry into Miss Temple's death, Miss Marple is visited by Archdeacon Brabazon, a friend of Miss Temple. He tells Miss Marple that he was going to marry Verity Hunt and Michael Rafiel in a secret ceremony. While he disapproved of the secrecy and worried about their prospects, he agreed to marry them because he could see they were in love. He was most surprised when neither turned up for the wedding, nor sent a note. Miss Marple stays another few nights with the three sisters when the tour moves on. Professor Wanstead travels to London by train on an errand for Miss Marple. Miss Barrow and Miss Cooke decide they will visit a nearby church. Later that evening, Miss Marple talks with the sisters about what she thinks may have happened and, while they are doing so, Miss Barrow and Miss Cooke appear, to talk to Miss Marple. They stay for a time and are then invited back for coffee that evening.

As they talk about Miss Temple, Miss Marple suggests, albeit dissembling, that Joanna Crawford and Emlyn Price (two of those on the tour) pushed the boulder, and their alibis are mere fabrication. As they get ready to leave, Miss Cooke suggests that the coffee would not suit Miss Marple, as it will keep her up all night. Clotilde then offers some warm milk. The two ladies soon depart, although each returns to retrieve a forgotten item. At three o'clock in the morning, Clotilde enters Miss Marple's room, surprised when Miss Marple turns on the light. Miss Marple tells her that she did not drink the milk. Clotilde offers to warm it up, but Miss Marple tells her she still would not drink it because she knows that Clotilde killed Verity Hunt and buried her body in the wreck of the greenhouse, because she could not bear Verity leaving her for someone else. She also knows that Clotilde brutally murdered Nora Broad to (mis)identify her body as Verity's and thus throw suspicion on Michael Rafiel. Clotilde murdered Miss Temple as well. As Clotilde advances toward her, Miss Marple blows on a whistle, which brings Miss Cooke and Miss Barrow to her defence — they are bodyguards employed by Mr Rafiel to protect Miss Marple. Clotilde drinks the milk herself, which is poisoned. Miss Marple tells the story to the Home Secretary, including that Verity is buried on the property of the Bradbury-Scotts. Michael Rafiel is set free. Miss Marple collects her inheritance, confident she completed the task given her.