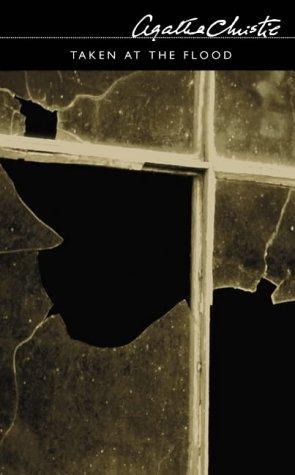 Taken at the Flood - Agatha Christie

In a flashback from late Spring to early Spring, Lynn Marchmont, newly demobilised from the Women's Royal Naval Service, finds difficulty settling into the village life of Warmsley Vale. She is engaged to Rowley, one of several members of the Cloade family living nearby. Each of them grew dependent on money from Gordon Cloade, a childless widower who was expected to die and leave his fortune to them. But instead he marries an Irishwoman, Rosaleen Turner, invalidating his previous will, before being killed in an explosion at his home, which his new wife survives. As a result, Rosaleen inherits Gordon's fortune and the entire family now faces financial crisis, augmented by the poor state of the economy in the aftermath of World War II. Rosaleen's fortune is zealously guarded by her brother, David Hunter, and although various family members manage to wheedle small sums out of Rosaleen, David refuses to help Frances Cloade, whose husband Jeremy is on the brink of ruin.

A man calling himself Enoch Arden arrives in the village, and attempts to blackmail David by saying he knows how to find Rosaleen's first husband, Robert. Their conversation in Arden's hotel room is overheard by the landlady, who immediately tells Rowley Cloade. Later, Arden's body is discovered in his room with his head smashed in. Rowley Cloade appeals to a detective, Hercule Poirot, to prove the dead man was Robert Underhay, and Poirot produces Major Porter, who knew Underhay in Africa. At the inquest, despite Rosaleen's protests that the dead man was not Robert, Porter confirms that Arden was indeed her first husband. The estate will revert to the Cloades.

Rosaleen has a strong alibi for the time of the murder since she was in the London flat that evening. David has only a weak alibi: down from London for the day, he met Lynn on his dash to catch the last train to London leaving at 9:20 pm, and evidently telephoned her from the London flat shortly after 11 pm. Since the murder is believed to have taken place shortly before 9 pm, he had enough opportunity and motive to be arrested.

David's alibi improves when it is discovered that a heavily made-up woman in an orange headscarf left Arden's room after 10 p.m. The investigation shifts back to the female Cloades, but Poirot discovers that the immediate cause of Arden's death may have been smashing his head against a heavy marble fireplace fender. The appearance of a murder may have been created after some form of accidental death.

Lynn, though engaged to Rowley, seems to love David. Rowley may be attracted to Rosaleen, who seems to be consumed with guilt and fear. Major Porter apparently commits suicide but leaves no note. It comes to light that Arden was actually Charles Trenton, second cousin to Frances Cloade. She came up with the plan to blackmail Rosaleen after hearing Major Porter's anecdote from Jeremy. Although this explains Arden's identity, it does not clarify who killed him or who bribed Porter to falsely identify the corpse.

Rosaleen dies in her sleep from an overdose. Superintendent Spence, the investigating officer, suggests that perhaps she was the murderer; the police have so focused on David's alibi that they subjected hers to little scrutiny.

Lynn tells Rowley that she wishes to marry David Hunter. Rowley is strangling Lynn when Poirot stops him. David arrives and Poirot explains everything. Rowley visited Arden, and seeing the physical resemblance to Frances, reacted angrily to the deception that was being played. Pushed by Rowley, Arden fell against the marble fireplace fender and died. Rowley saw the opportunity to incriminate David. He smashed in Arden's head with fire tongs and left David's lighter at the scene. It was Rowley who persuaded Porter to give the false identification, carefully employing Poirot, who would be sure to go to Porter on the basis of that first scene at the club, which Rowley also knew of from Jeremy. Porter's guilt got the better of him and he committed suicide, leaving a note that Rowley destroyed.

Discovering Arden's body, David ran for the 9:20 train but missed it; Lynn actually saw the smoke from the departing train on the evening, but he convinced her that it was earlier than it was and that he had time to meet her. He then backtracked to The Stag, disguised himself as a woman, and played out the scene that established the later time of death. Then he returned to the station and called Rosaleen, who placed a call to Lynn that was delivered by the operator but then cut off. Afterward, David spoke to Lynn from the station, giving the impression that a single call from London was interrupted. He returned to London on the milk train the next day.

Of the three deaths, one is accidental, one a genuine suicide. The only true murder was Rosaleen's. David had no apparent motive to kill his own sister, especially when it would mean depriving himself of the Cloade fortune. But the woman posing as Rosaleen was not his sister; his sister was killed during the bombing of Gordon Cloade's estate two years earlier. The woman posing as Rosaleen was one of Gordon's housemaids, who became David's lover and his accomplice in obtaining the Cloade fortune. Now he could kill this accomplice and marry Lynn, whom he really loved and who would gain a portion of the fortune through family connections. In the end, no one is tried other than David. Rowley is implicated in the deaths of Trenton ("Enoch Arden") and Porter, and he is guilty of misleading the police and assaulting Lynn. However, Poirot keeps silence about Rowley's crimes, allowing Rowley to marry Lynn, who has loved him without realising it.

Taken at the Flood - Agatha Christie